There are more than 600 programming languages and the demand and popularity of each of them fluctuate every year. Due to the shift to more agile and flexible technologies, most businesses are using a mix of multiple languages. However, Java always seems  to end up at the top of the list. 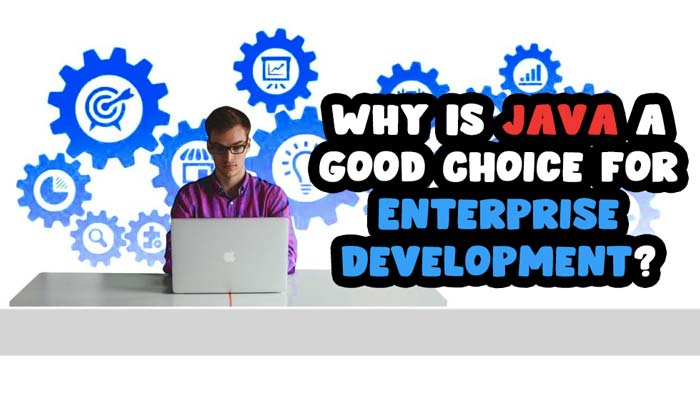 Java was dethroned by the C programming language in the TIOBE Index for June 2020. However, this is a general list of all languages that ignores the fact that each programming language is used for a specific purpose. If you take the enterprise app development niche, you will notice that Java is leading.

Such applications are designed to meet specific enterprise-level requirements. They are based on large volumes of data and use extensive parallel processing, network distributed resources, and complex logic. They can operate simultaneously across multiple platforms and with many other applications. They encode business policies and rules and are created with specific requirements in mind. Hence, these applications require particular tools to cater to the companies’ needs.

Reasons Why Java Is Popular for Enterprise Application Development

From big data to micro-services, Java application development can be a game-changer for unique business problems. Java provides for the development of portable, high-performing apps for a wide variety of platforms.

There is nothing more boring than duplication. Java provides a clone method that allows developers to reuse common lines of code whenever possible instead of rewriting the same code over and over again. The common attributes between two objects within a class are shared so that the developers could focus on creating other attributes. This is one of the key benefits of Java since it makes coding simple, fast, and inexpensive.

2. The Code Is Easy to Understand and Troubleshoot

Java Runtime Environment (JRE) is part of the Java Development Kit (JDK). It contains a set of libraries and tools for developing java applications. After installing JRE on a computer all of your Java programs will be good to go. Besides its capability of running smoothly on computers with different operating systems, JRE is compatible with mobile phones.

Java’s Application Programming Interface (API) is rich and extensive. It contains a multitude of methods that can be utilized in any program. Java developers don’t even need to have much practical experience in all of them, a basic knowledge will be enough to be able to program in Java. Additionally, developers can utilize open-source libraries such as Google Guava, Gson, Apache POI, or Apache Commons.

Scala is one of the programming languages utilized for developing solutions for big data processing and machine learning solutions. However, Scala is hard to master so many developers within large companies use Java in its place, as Scala is essentially built on Java Virtual Machine and goes well with Java.

Also, developers who are experienced in Java can easily learn Hive or Hadoop, which are the other flexible technologies utilized for working with grid computing and machine learning. Java’s Micro Edition has proven to be a convenient and reliable platform for building IoT-based apps too.

When programming for a huge enterprise that uses a network of devices, the most difficult thing is to sync all computers so that application software runs flawlessly on each of them. Due to Java’s PATH and CLASSPATH environment variables, developers don’t have to worry about the distribution of application software across multiple servers.

The ability to run on different systems makes Java super adaptable. From top-end systems and powerful servers to old-fashioned hardware and devices such as the Raspberry Pi that prioritize reliability and versatility over performance, Java runs well within both small and large environments. Because of the lack of general constraints and the ease with which Java can be used to build solid code, Java is often chosen for enterprise development.

Integrated Development Environment provides great help in the development process. It allows saving lots of time and energy, as well as building a consistent development process within a team or company. While IntelliJ IDEA, NetBeans, and Eclipse are the most popular IDE’s for enterprise java developers, there are many other IDE’s that you can use according to your specifications.

The syntax is written in English which makes it easier for learners to understand and remember Java. For a beginning developer, learning Java means going through two stages — learning the basics and mastering the advanced concepts. Also, if a developer is familiar with JDK installation and Classpath setup, then the rest is easy. If the developer has a basic knowledge of C and C++, honing Java skills will take less time.

Many small and medium enterprises need application development but they don’t really have a big budget for that. Since Java is an open-source language, nearly all development tools can be downloaded for free. One more important thing to note is that there is no licensing cost involved while you are using Java. With Java being free, it makes advanced Java development for the enterprise applications cost-effective.

While many other technologies are emerging around us, Java stays strong and has tons of followers. If you are a company looking for enterprise application development, Java can be your good choice to start with.