It’s very hard to imagine even a single day without Google, with their products and services so deeply lodged in the daily lives of a lot of people. But even then most of the people don’t know when is Google’s birthday? So, Are you one of them? If yes, then don’t worry because today we will share the date of Google’s birthday and also how it became so popular that the word “Google” continues to be used as a verb for searching the Internet. Currently, Google celebrates its birthday on September 27th.

When is Google’s Birthday 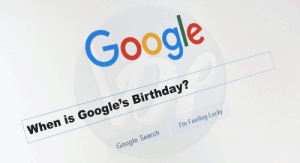 In 1995, One of the Google founder Larry page decided to attend the Stanford for grad school. At that time, Sergey was a second-year grad student. They both are not instant friends – even both of them thought the other was obnoxious. But, even then they thought to become friends and later they debated each other into partnership. That’s how two young grad school students started collaborating on a new search engine project.

In 1996, Both the Google Founders started to work on the New Search engine called as Backrub.

In the January 1996, Larry page started to work on a new search engine project known as Backrub. At that time, Backrub search engine is the way to translate the idea of citation into the growing World Wide Web. But, later on, Larry page thought to develop a search engine and both of them realized that this would make a fantastic consumer engine.

Also Read:- How to Make Your Internet Faster

Previously, all the search engines display pages depending on the number of times a particular keyword is used in that page. But, Larry and Sergey used an innovative approach to display search results by relevancy. This innovative algorithm was named as Page Rank. After that, the Backrub was renamed as Google and both of them decided the start “Google” as a startup. The word Google was derived from the word “Googol” which means a number represented by one followed by hundred zeroes.

The domain www.google.com was registered in the year 1997, but the Google started doing their business in September 1998. Generally, Google uses the year 1998 as the launch date to calculate their age. But, As we know that it had been started by both the developers in 1995. By most of the accounts, Google official opening day was September 7th, but Google shifted this date to 27th September.

So long story, Google birthday could be asserted as 7th September, but Google officially celebrates on September 27th, 1998. We are sure that there may be some specific reason for 27th, but all that matters is Google arrived in 1998 and it’s been a great ride ever since.

So, That’s how Google launched and became the world’s biggest search engine. I hope this post helped you to get the required information you are looking for. If this post helped you, then Just like, comment and share this with your friends, family, and relatives.