Many Mac Users are coming from the good old windows PC world, including myself. The thing that bugged me when I started to use Mac OS, that there was no option to view current ongoing tasks or to take control over the useless process. Sadly, being new to Mac environment, I didn’t know the app is renamed as an activity monitor. Activity monitor doubles as task manager mac version. Similar to windows, it lets you have control over applications, force quit them and keeps a check running processes on your Mac computer. If you’re not familiar with mac task manager then don’t worry, it’s not very complicated as windows but simply straightforward. Let’s learn how to use the task manager on Mac. 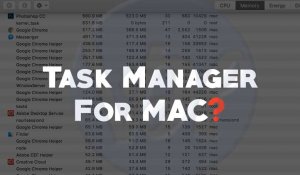 If you were a windows user back then, you probably had access to task manager by using key combinations of Control+ALT+DEL. But in Mac OS, the procedure is a little bit different. You can either access the app directly from the launch pad or by searching it on the spotlight. You have had to use task manager mac version; we recommend you to create a shortcut on your dock.

2. Use Task Manager on MAC Via Launchpad

When you enter the task manager on mac, you have access to various properties related to CPU power consumption, ram usage, all incoming and outgoing data packets, Kernel tasks, daemons, and energy drainage.

You can easily kill or terminate any ongoing process; the reason might be anything. Either the program stopped responding, or it is some sort of malware which you need to terminate. We will explain to you how to terminate google chrome app to give you an idea how it works.

All live stats are projected at the bottom of Activity monitor tab. You can check all the live data of CPU process, System memory information, Disk activity logs, Network packets and energy consumption.

We recommend you to keep a shortcut of this useful Task manager for mac in your dock all the time, who knows when you might need it right? With this, we have come to end of this article. We hope you have learned some new things about what your mac can do. Please come back again to read more tips about Mac and Windows in general. Have a great day!