If you are searching for a new laptop or pc or just looking for a hard disk that will help your pc run smoothly, then you should read the following article. Today we are going to compare both the SSD and SSHD to provide you a clear-cut overview so that you can easily choose one for yourself. But, before that, you must have some knowledge about these terms. Therefore, without further discussion, let’s move to the point directly SSD vs SSHD. 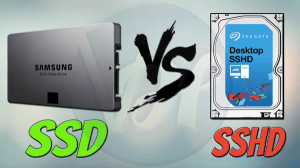 What SSD & SSHD Stands For?

SSD stands for solid-state-drive, and it is same as the larger USB flash drive. Unlike the traditional moving parts. SSD doesn’t have any moving parts. So, it means the SSD holds the storage on the memory chips rather than the moving plates.

On the other hand, SSHD stands for solid-state-hybrid-drive which is a traditional type of hard disk that has a controller chip which can control and direct your data either to the SSD or HDD. This hard drive usually comes with a little amount of memory to store your data. Also, it would appear you like the single to Windows, and the memory chip decides which data should be stored on the SSD and what should be left on the HDD.

SSHD vs. SSD: Which Storage Type is Best for You

These two drives work differently depending on the gadget you own. But, you must know about which one will work best on your PC or Laptop. Let’s firstly talk about Computers.

If you own a computer, then there will be no much use of the SSHD because computers usually come with inbuilt hard drive and SSD. No matter if you have a pc or laptop, when you have an SSHD drive installed, then your computer will decide where to store your data and files so that it will be well organized and safe.

However, you can opt for the SSHD, if you want smooth working of your computer. Windows operating system may work fine on a 120 GB SSD, and the storage space will be enough for the OS and other programs. Also, then the HDD drive can be a perfect choice for your other data like pictures and videos. 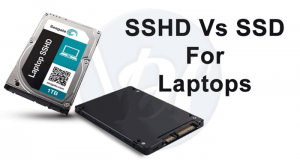 SSHD and the SSD are the best hard drives choices available for the high-speed gadgets. So if you have a laptop, then you have to decide which one is most important for you guys – performance or internal storage. We’ve found that the SSD is the best option for you if you are conscious of the performance of your laptop.

On the other hand, if you need more internal storage, then you should opt for a typical hard drive which will even cost you less than the SSD drive. Also, if you are conscious about both of them, then the SSHD will be the last option for you.

The SSHD drives have a unique feature that can recognize your most used apps and programs and then it will automatically send data to the solid-state-drive which will ensure better performance of your device. However, it doesn’t beat the SSD storage and high performance. Besides that, always be careful about the size of your laptop, because specific drives will not be suitable for your laptop.

That’s it! As you know learned that the SSD provides better performance than the SSHD. And, On the other hand, SSHD can offer you more storage as compared to the SSD drives. So, it depends on which type of device you own and the answer to this question is straightforward. If you want better performance than the storage, then you should opt for SSD, and if you need more storage rather than the performance, then SSHD might be a good choice for you.