Believe it or not, there are lots of files and folders which the MAC OS X doesn’t want you to see. Most of the times, these are system files, but sometimes there may be some files which can lead to dangerous malware and virus.

These infected files can cause something bad on your computer and if it happened, then you may lose your important data. So, what would you do to protect yourself? Do you want to know how to show hidden files on MAC?

How to Show Hidden Files on Mac?

Then, all you have to do is simply use the steps we have provided in this guide. But, before that, let’s understand which files are hidden and why these files are hidden?

1. Which Files are Hidden on the Mac?

Basically, the hidden files end with an extension a. and they won’t show up in your normal files. For instance, the files may be a .htaccess, or a .svg directory. Also, there may be some folders like /usr, /bin, and /etc.

The Folder which almost every Mac user wants to access is the Library folder. It’s because all of our personal information is stored there and in some cases, data is also stored.

Also Read:- MAC Print Screen | How to Screenshot on Mac

2. Why Mac OS X Hides Some Files From Users?

Some files and folders are considered to be dangerous for users and to protect their users from any damage, Mac hides these folders from their users. You may be eager to know about those hidden folders, but before doing anything, just keep in mind that these folders can cause damage to your system.

So, we recommend you to backup all your data before doing anything with these hidden files. Also, never try anything before having proper knowledge about the task which you are going to perform.

3. Where Can You Found the Library Folder? 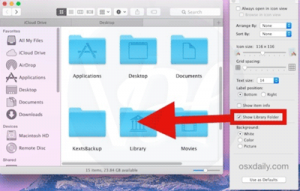 You may have seen the Macintosh HD folder and thought you have found the Library folder, but that’s not the right folder at all. Basically, there are 3 Library folders in Mac. The first one contains the files which you can access but you can’t be able to change them.

Also Read:- How to Recover Deleted Files on Android Without Root

4. How to Show Hidden Files on Mac?

The process is so simple that even a casual user can see those hidden files and folder using the steps we have provided below:

That’s it! Above are the steps which you can follow to show hidden files on Mac. I hope this post helped you to get what you were looking for. If you found this helpful, then share it with your friends who are also looking for the same information.

Also, if you have any questions or queries regarding this post, then let me know in the comment section below.