Screen overlay detected is a common problem in new Android smartphones. It happens because of the floating apps you might have installed. Few examples are a blue light filter and facebook messenger apps. These apps try to draw the overlay structure and ask for system permission. This was not a thing with Android KitKat but advancements for security features I android, it good to know that you can control which apps will have the permission to draw over your apps.

How to Fix Screen Overlay Detected in Android

Also Read:- How To Fix “Mobile Network Not Available” Error in Android

1. How to fix screen overlay detected Error in Samsung

this might do the trick for you but something there is always more. If the above mother didn’t work and you’re still getting the screen overlay detected error message then try this:

This is a very simple way to fix this issue on your android smartphone. If you are a RedMi device user then I am sure that this method is very helpful for you. Here i will provide you a quick trick to fix the problem.

Sometimes some apps may ask for permissions and when you try to allow, it shows you the error “Screen Overlay Detected”. In that case, you have to check that messenger whether the chat head is open on the screen or not! if the Messenger Chat head is running on your android screen then close it first and then try to give permission again. This trick is 100% working and I have also tried it on my phone. 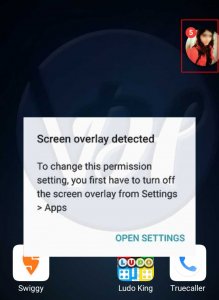 Generally, you have to give permission to these apps, so they are allowed to place on-screen buttons or animations. You can enable or disable any of this permissions according to your privacy terms.

Enable permissions by going to settings > application > application manager. There you will get a bunch of list of apps. You can edit their permission details by clicking on the app names sliding the toggle bars.

You can fix app permission easily by using the inbuilt safe mode provided by Samsung. Follow the steps below to boot into Safe mode

If the above process sounds very tricky and confusing to you, then you can try these alternative apps which will do the job for you in mere seconds.

Install Button Unlocker: This app will solve the problem of unclickable install button while you are using any kind of screen overlay app. This problem is generally caused by screen filter and blue light filter apps. Alert Window Checker: This app will display a list of apps which are currently using screen overlay permissions to draw over other apps. You can also uninstall or force shut down an app from its dashboard if it is causing any user interface problems. Screen overlay applications are great as they give us a sense of multitasking and gets us more stuff done in the same amount of time. However, as you saw above, these apps can cause quite big problems for the user interface and can make it responsive. I hope you have understood the above article completely. If you’re facing any kind of issue while fixing the screen overlay detected issue then feel free to address that issue in the comment box below. We will be happy to assist you.