In today’s era, many people are using Android devices. Because it comes with a lot of features and it is a very popular operating system. Android phones are popular for their features as well as they are also popular for Bloatware (Pre Installed Not Useful Apps). Some of the Pre-Installed apps are very useful, but not all. And the problem is we that can’t remove them officially 🙁 . So if you are one of the people, who want to remove system apps from android. Then you are on the right page. 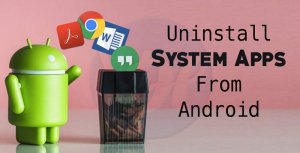 How to Remove System Apps From Android

This method is for root users only. If you don’t know what is rooting, then you should read this article which is about what is rooting and how to root android without PC. But if you don’t want to root your device then you should use this method, which is how to remove system apps from android without root. So now you have a choice, No matter whether your device is rooted or not. You can remove bloatware easily.

How to Remove System Apps on Android By Using Lucky Patcher

Warning:- Don’t remove any app which is important for your device, we are not responsible for any issue or query.

I hope you like this article, which is about how to remove system apps from android with root access. Share this post on your social media profile to help other peoples, who are facing the same issue on their android phones. Also if you want to ask any question then you can ask in the comment section below.