Since both the Linux and Windows provides impressive benefits, it becomes a difficult task to decide which one will be the right option for you. In fact, both the operating systems have their drawbacks also. For example, Windows offers a user-friendly experience and supports a huge variety of applications, whereas the Linux doesn’t. In this battle of Linux vs Windows, we have provided some differences which you can consider while choosing the best option. 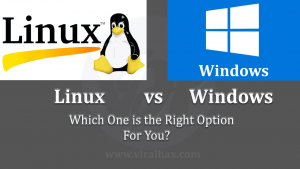 Linux Vs Windows | Which One is Better

On the other hand, Linux provides more customization and security options, whereas the Windows doesn’t. But which one is better than the other?

The Linux OS contains a feature known as “Live Boot” which allows you to boot from a DVD or USB which means you don’t need to actually install the OS to test it. This can be a useful way to track whether the Linux works best for you or not. However, it’s an upside for Linux, but installing it on your computer is its downside because it requires technical know how to set it up.

Contrary to this, Windows doesn’t have the live boot feature, but still, it’s better than Linux because it’s easy to install and there’s no need of technical knowledge to install it on your computer. So, you can start using Windows even if you are a casual user.

Most of the applications and software are designed for Windows OS because its a widely used OS and almost 90% computers in the world use Windows as their operating system. If you are a Linux user and you want to use some applications which are not even supported by Linux, then how would you use them?

It seems to be shocking, but it’s the reality that Linux doesn’t support a huge variety of applications and software. Moreover, Installing a program in Windows is quite easier than Linux. I think it’s clear from the points that Windows is better than the Linux in case of Compatibility with devices and programs. 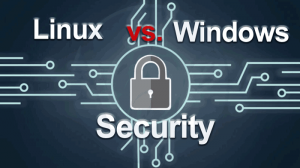 I’m going to preface this by just saying that no operating system is 100% secure. Yes, you heard it right! If your computer is connected to a network, then it’s vulnerable. As Windows users were attacked by the WannaCry ransomware which clearly shows that the Windows is not so secure. But this is not in the case of Linux. The Linux OS is much more secure than the Windows OS as it contains a non-vulnerable design which makes it difficult for the hackers to inject any malicious code. But, it doesn’t mean it’s completely secure. It can be hacked but requires bit more efforts than the Windows. 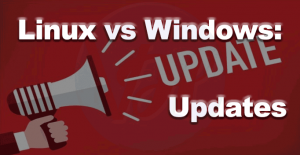 Recently, I’ve heard that the Windows shuts down automatically for the updates and people are losing their important work because of it. I’ve also faced this and I don’t even know why Microsoft has added this feature. Many users are facing problems regarding it. They don’t want any automatic updates.

On the contrary, Linux doesn’t have these kinds of issues and users have full control whether they want to update the OS or not. The operating system doesn’t insist an update on the user. Whenever the users receive the message to update, they can either update the OS right away or set it to update later.

Well, these are the common differences which you can consider while selecting the right operating system for you. I hope this post helped you to find what you were looking for. But Wait! Have you decided which one is the right option for you? If yes, then let me know your choice in the comment section below.