Do you own an iPhone 5s and confused about whether to upgrade or not? If yes, then you have landed on the right page. In this ultimate blog post, we are going to show you the difference between iPhone 5s and 6s which will help you to make a better choice. We would start exploring the pros and cons of both the devices and these differences will help you to decide the better option for yourself. So, without wasting any more time, let’s move forward to the iPhone 5s vs iPhone 6s battle: 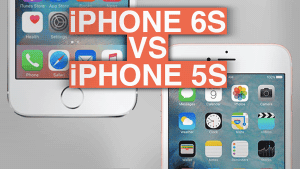 Some Common Difference Between iPhone 5s and 6s

In terms of design, Apple has made a very different approach in case of iPhone 6s. They have made it slimmer and the edges are circular, whereas the iPhone 5s doesn’t have curve-edges. The iPhone 6s also has a bigger screen size of 4.7 inches, whereas the iPhone 5 has a smaller screen as compared to the iPhone 6s. The power/sleep button is also shifted from the top to the right side of the device. iPhone 6s features a new gesture known as Reachability which allows you to access half of the device screen.

When we look at the camera quality, it may seem quite similar for both the devices, but it has some differences. Both the rear and the front camera holds the same pixel number, but the iPhone 6s has a new autofocus pixel technology which helps you to focus whenever you are doing photography. The iPhone camera has the ability to shot videos at 20-60 frames per second which is much better than the iPhone 5s camera. You can also make slo-mo videos using the iPhone 6s.

Apple has added a number of unusual features to their new iPhone 6s launch. iPhone 6s features a landscape mode which allows some third-party apps to function in the landscape mode and they work similar to the iPad. The iPhone 6s also has a Touch ID which gives you the option to authenticate actions and because of it, no one can access your device without your permission. Another interesting feature is the built-in NFC which allows you to make purchases using the Apple Pay service.

iPhone 5s vs iPhone 6s: Which One to Choose?

It’s still quite difficult to suggest the best option for you because everyone has their own needs and requirements. If you ask me, then I would recommend you to go through the above sections and choose the one which fulfils your needs. I hope this post will help you to make a better choice. If you found this helpful, then share it with others who are facing the same issue.