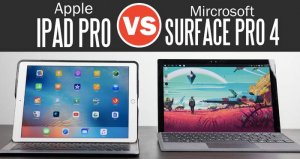 Also Read:- Uber Vs Lyft | Difference Between Uber and Lyft 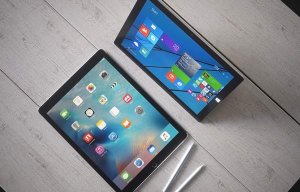 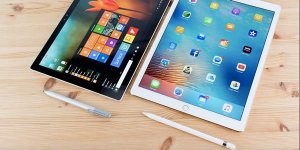 Some other plus points of Microsoft  Surface Pro 4 vs iPad Pro are that Pen can be attached to the Surface Pro display but this cannot be done with the iPad Pro. Also, the Surface Pen features an eraser at the back and has an eraser button too.  The Surface Pen is smoother in its usage compared to Apple pencil, but the Apple allows you another better feature. With Apple iPad Pro you can use the touch and pen together. The overall usage of Apple iPhone Pen is more accurate and exact.

In terms of portability, the 9.7 inch iPad Pro again wins the battle, since it is easy to carry. It is only 0.24 inches thick, and therefore the thinnest of the three iPads. The other iPad Pro which is 12.9 inches in length and 0.27 in thickness is too large and the 12.3 inch Surface Pro is also difficult to handle.  But the Surface Pro is much thicker with a 0.33-inch thickness.

The Surface Pro has a built-in kickstand and supports a full-size USB port, a mini DisplayPort, and a microSD card slot. In terms of weight, the Surface is heavier than the two models of iPad Pro. It weighs 1.7 pounds without a Type Cover and 2.4 pounds when a Type Cover is added to it. The 12.9 inch iPad Pro, on the other hand, weights 1.6  without a Typo Cover and 2.3 pounds and with a Typo Cover. 9.7 inch iPad Pro is lightest of all three. It weighs   0.96 pounds without a keyboard and 1.5 pounds with the keyboard.

I hope you liked our today’s article. So, how was the article? If you liked it then please let us know your feedback in the comment section, beside this you can comment down your queries and suggestions also. And visit here again and stay connected with us for more articles and tech information.