If you are laptop user, then you probably know about the i3 and the i5 processors, but still, there are a lot of people who just know the name of these processors and doesn’t know the function of these processors. If you are one of them, then you must read on this entire blog post. In this blog post, we are going to do an i3 vs i5 battle which will help you to understand the difference and choose the right processor for yourself. So, without having any more discussions, let’s start exploring. 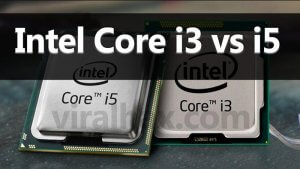 Differences Between Both the i3 and i5 Processors

The clock speed of a processor helps your system to make tough calculations more easily and quickly. In terms of clock speed, i5 processors are better than the i3 processors. You can see the difference by just performing a complex rendering task either in Microsoft Excel or Photoshop. Intel’s i5 processors are equipped with high-speed boosters which will help your system to handle workloads effectively. On the other hand, i3 processors may lag whenever a complex action takes place on your device.

Also Read:- Ryzen vs Intel: Which One is the Right Option For You?

As we all know that i3 computers are quite cheaper than the i5, so they only have two cores on both the laptop and the CPU. On the other hand, i5 processors are quite expensive and they have multiple cores on both the laptop and CPU sides. The intel’s i5 processors help devices to run power programs and games efficiently and effectively. Aside from that, almost every function works fine when a quad-core gets installed on a computer.

As we discussed above, i5 processors are quite expensive than the i3 ones. Whenever you purchase an i5 processor, then you will see a 50-100$ difference depending upon the capability of the processor.

As i5 processors tend to give more features as compared to the i3 processors, that’s why you have to pay more in order to get it. These operators can be more expensive in the case when you want more features included in your processor.

The more watts a processor uses, higher the amount of heat it’s gonna generate. The i3 processors run smoother than the i5 processors which means they don’t generate a lot of heat. On the other hand, i5 processors handle a lot of complex tasks, thus they tend to generate more heat as compared to the i3 processors. This may cause your device to heat up quickly which in return can cause irreparable damages to your computer

Conclusion: Which One Should You Choose?

It’s still difficult to suggest a better processor for you as everyone has their own needs and requirements. If you ask me, then I recommend you to use the i5 processor as it gives better options than the i3 processors, but it doesn’t mean that the i3 processors are of no use. You can still purchase them if you are a non-techy person.

I hope this post will help you select a better option for yourself. If you liked it, then share it with others who are still finding the same. Also, if you have any doubts, then let me know in the comment section below.