From January 2020, Microsoft has discontinued providing support to Windows 7 systems. This decision was disheartening for many users, as Windows 7 was one of the most popular operating systems and was used by millions. 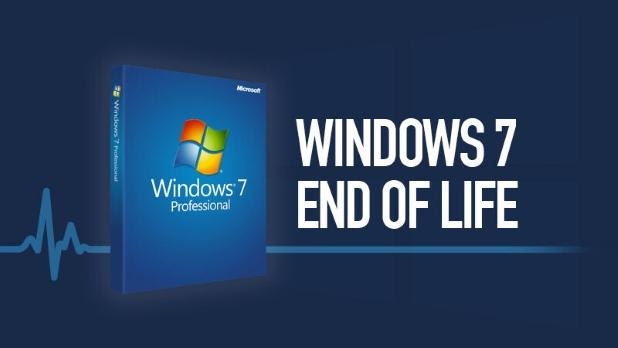 Despite Microsoft releasing Windows 8 and Windows 10 after its release, the popularity of Windows 7 never went down. It provided users with a modern interface to their system and lift-up the Microsoft after the disaster of Windows Vista.

Many are stating this decision as a strategical move of Microsoft so that more and more users join the current version of Windows- Windows 10. Since Microsoft is spending most of its resources on building and updating Windows 10, it is evident that they want maximum users on Windows 10 rather than on any other operating system.

Now that its support is wrapped up, it does not mean that you cannot use Windows 7 on your laptop at all. Don’t worry, if your system is running on Windows 7, it won’t be dead. Well, at least, as of now. But since the support is stopped, that means there will no new updates, which also means no updated security patches.

Due to various reasons, many users are still using Windows 7. Many of them doing their essential tasks that also involves the internet. Since there are no latest security patches available on Windows 7, these users are most vulnerable to the online attacks.

If you are one of those users, who are still using Windows 7 operating system on your laptops or PC, here are some valuable tips to secure it from external threats.

1. Secure your System with Security Solutions

Since the update to Windows 7 is off, its built-in security solution is outdated and impotent to detect the latest security threats. So, your system is exposed to get attacked by the harmful malware. It is vital to secure your system with a proper antimalware solution that can safeguard it from malicious activities.

If you carry some essential files on your Windows 7 system, then just getting an antivirus software is not enough because there is always a threat of ransomware attacks. So equipped your system with antimalware that also saves you from ransomware attacks, or you can have a robust anti-ransomware installed for the extra protection of your files.

2. Use a Secure Web Browser

Browsing the internet using an insecure browser on Windows 7 is like inviting the malware programs for partying on your system. Clearly, you don’t want that. So it is recommended not to use the insecure web browsers like the Internet Explorer on your Windows 7 devices. Instead of that, you can go for the browsers who have committed to support the Windows 7 operating system for a few more months.

Google Chrome has extended its support to the Windows 7 users till July 15, 2021.

Mozilla Firefox is also available for Windows 7 currently, however, it is not clear till how much time they would support it.

Bloatware are programs that come preinstalled on your laptop or PC. Apart from them, there might be many third-party apps installed on your Windows 7 system, many of those might be from unknown sources. Since Windows 7 is no longer supported, it is better to get rid of the bloatware and useless apps.

Uninstalling them would reduce the risk of external threats and security breaches. Moreover, it would also free up some hard disk space. It is also recommended to frequently update the necessary applications until the updates are available

4. Get a VPN Service

If you require to use the internet while working on Windows 7, then instead of browsing directly, get a good Virtual Private Network Service (VPN). VPN would safeguard your identity and online privacy while you browse the internet.

A good VPN would hide your private information like IP addresses, browsing activity, and geolocation. It would also encrypt your files while you are exchanging them on the internet.

By good VPN, we meant the paid ones that provide more reliability and security. Free ones are mostly adware.

Since your system’s OS is outdated, you can’t just rely on old passwords and reuse them. Get a good password manager that would help you to create a unique and strong password for the system. You can also save your other accounts password such as Gmail, Facebook, Instagram, and many others.

6. Disconnect your Device with Network

If you are one of those users, then it is suggested to cut off your Windows 7 system from the internet network. Since the internet is the biggest gateway to harmful, malicious programs such as Trojan, Ransomware, Spyware, and others, it is better to keep your insecure system away from it. If possible, disconnect your USB ports too.

7. Educate yourself on Malware Attacks

Malware attacks are on rising periodically. Cybercriminals are getting more and more advanced and evolving themselves to breach even the secured systems. Getting a complete security solution for your system is good, but not enough. If you don’t have proper knowledge of the attacking methods used by cybercriminals, you won’t be able to save your system for longer; it does not matter whether it is Windows 7 or Windows 10. So please educate yourself on what are the different malware programs, how they get an entry on the system, what tricks cybercriminals use to deceive users in installing the malware, how to identify an insecure or fraudster website and program.

So, these are the several tips to safeguard your Windows 7 devices. However, it is advised to switch over to Windows 10 as soon as possible because, irrespective of how many safety measures taken, working on an outdated system is always a risky task.