Did you recently decided to subscribe for HBO, but confused to choose between the HBO Now or HBO Go? If yes, then you’ve come to the right place. In this blog post, we are going to do an HBO Go vs HBO Now battle, which will help you to decide which one is the right option for you.

However, both the versions are kinda similar, but still, there are some differences which need to be spotted. So, without wasting any more time, let’s dive into it.

The Cost of HBO Go primarily depends on your cable provider because there are some cable providers which will give you the HBO Go subscription for free. Also, the prices or the cost varies from area to area. For instance, it can cost nearly around 10$ and it can go high up to 20$ depending on a lot of factors like the package you have chosen, area service etc. If we look, on the other hand, HBO Now will cost you around 14.99$ per month which is a little bit higher than the HBO Go. 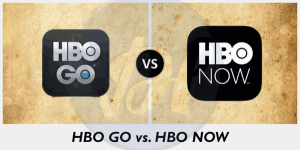 Still, there are two platforms where the HBO Now doesn’t work which are Microsoft Edge and TIVO. If these are your main streaming platforms, then you shouldn’t opt for HBO Now, rather you can opt for HBO Go.

Also Read:- Apple Music vs Spotify: Which One is Best For You?

The Initial Process of both the services is too different and involves a number of different steps. If we talk about HBO Go, then you have to first contact your cable provider to start using it which may seem a nightmare to some users. On the other Hand, Setting up HBO Now is kinda simple and easy. All you have to do is just create an account, sign-in and start streaming the content right from your desktop. Also, Up to three persons can use a service altogether at the same time.

Also Read:- Spotify vs Pandora: Which One is Best For You?

As the HBO help page explains that there is same content in both the plans, then I think there wouldn’t be any chance to make a choice depending on the variety of content.

HBO Now or HBO Go: Which One is the Better Option?

I think it’s clear from the above points that both the plans have their own pros and cons. Ultimately, choosing the right option still needs some thinking and we can’t give you the exact option because everyone has their own needs and requirements. So, we recommend you to figure out your needs and then choose the option which suits you better. I hope this blog post helped you to get what you were looking for. If you found this helpful, then share it with your friends, family, and relatives.