Having some special and best fallout 4 weapons can help you to kill your enemies quickly and also helps you to defend yourself. They provide some special abilities to the player such as making the target more stagger or poisoning them. But, it’s harder to know where the weapons will be available and which of them are best? 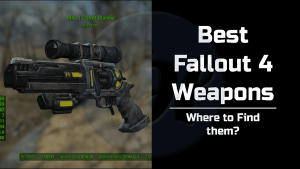 Now, you don’t need to worry about this because today in this post, you’ll get the list of the best Fallout 4 weapons, and you don’t even need to pay a single dime for them.

The Righteous Authority is a kind of energy rifle that can be used to do critical shots. The shots can do double damage and the critical meter fills 15% faster. You will get this weapon as a reward for calling the arms during the game. That’s the first quest which you can do for the brotherhood of steel. In order to start, just talk to the Palading Danse in the Cambridge police station.

The Kellog’s Pistol has the ability to refill your AP on critical shots makes it one of the deadly revolvers in Falldown 4 game. This requires a .44 for ammunition which are far away from the common. You can only get this weapon during the reunion main quest. It is in Fort Hagen and the weapon is equipped with Kellog. In order to get this, you need to defeat him and loot his body to get the pistol.

The Grognak’s Axe is another powerful and best Fallout 4 weapon which causes the target more stagger and bleed damage. You can only find this weapon in north-east of Diamond city look where the Hubris comics building is situated. Just visit the building and when you enter the building look to your left side, and you’ll see the Gragnak’s Axe locked in a glass box. You must have the advanced lockpicking skills in order to get the Gregnak’s Axe.

Also Read:- How to Play PS3 Games on PS4 Console

The Le Fusil Terribles is one of the best Fallout 4 weapons which can load 32 shell case at a time and cause impressive damage to your enemies. It has a special ability to cause 25% extra damage when used on the same victim. This shotgun can be found on the overturned ship in the east called “Libertalia”. Just use the elevator to board to the place and then go to the top where the captain’s cabin is built. The weapon will be right in front of you as you enter the room. 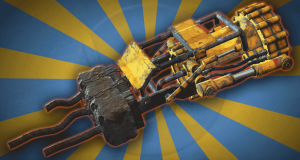 Furious Power Fist is another Fallout 4 best weapon which can be used to cause more stagger and damage to your targets. You’ll find it next to the swan’s pond to the right of Diamond city. The whole area is covered with radioactivity. Since the boss is quite strong, you need to use grenades and Molotov cocktails to defeat him. Also, you can drop down the mines and then lure the boss into them. After killing the giant, you can loot the power fist from his body.

From the above, which one do you think is the best weapon? Let us know in the comment section below.