When it comes to note-taking programs, there are two giants which have been taken a big share of the market. In this post, we are going to do the Evernote vs OneNote battle which will help you to make a choice between these two applications. Both of them have their own pros and cons, but still choosing the best one may be difficult for some people. 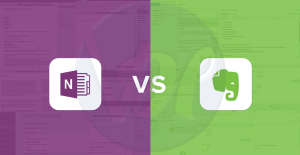 If you are one of them and you want to know which one is the right option for you, then you’ve landed on the right page.

Usually, people don’t want to mess up with a bunch of unorganized lists, but if you take a lot of notes with Evernote daily, then the things are going to be complicated for you. On the other hand, OneNote works completely different than the Evernote. It organizes your every single note into folders which makes it easier to access the files. 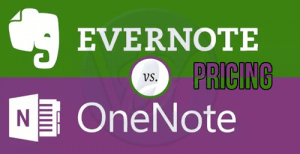 When talking about pricing, both the programs have free and paid subscriptions with a lot of outstanding features. But, then the Evernote made a big mistake by restricting their free versions. Now, you won’t be able to use the Evernote free version on not more than two devices which is a bad news for some users because almost every person has more than two devices. On the other hand, Onenote doesn’t have imposed any kind of restrictions on their free version. You can use the Onenote free version on as many devices as you want.

Are you a writer, web developer or a designer who always finds a lot of ideas from the internet and wants to clip them? If yes, then web clipping is the feature which is gonna help you. You can bookmark every single web page you like using the web clipping feature. Both Evernote and Onenote provides this feature, but the difference lies in the compatibility with devices. Evernote’s web clipping works fine on both the desktop and mobile devices, whereas the Onenote’s web clipping doesn’t work great on mobile devices. Since clipping on the go is great and that’s why Evernote wins the race here.

Also Read:- Apple Music vs Spotify: Which One is Best For You?

Both the Evernote and Onenote are compatible with a number of web applications which gives them more flexibility. Evernote is compatible with so many apps that it could easily surpass the Onenote easily. As the Onenote is developed and marketed by Microsoft, it works well with the Microsoft office applications. If you hang out all the day with Microsoft Office, then you should opt for Onenote, otherwise, you can choose Evernote which supports a good number of apps and platforms.

Evernote vs Onenote: Which One You Should Choose?

If you use a lot of devices daily, then you can choose Evernote because it’s compatible with almost every platform like Android, iOS, Windows etc. If you are into the world of Microsoft, then you can opt for the Onenote because it works great with the Microsoft Office. I hope this post helped you to have a clear idea about these two programs. If you found this post helpful, then share it with your friends. Also, if you are still confused to choose between Evernote and Onenote, then don’t hesitate to connect with us through the comment section below. We would love to help you.