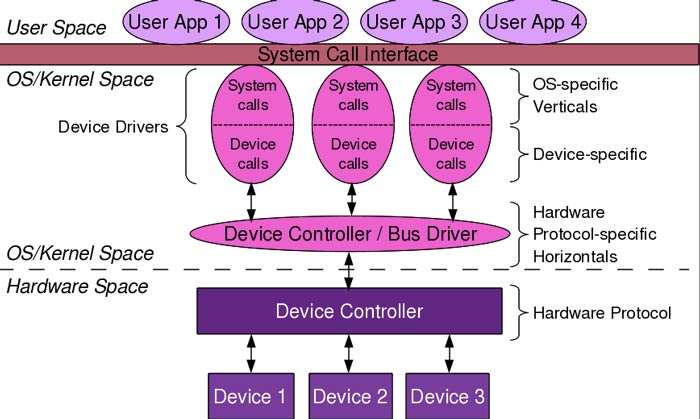 A kernel is an integral part of any operating system. During startup on any device, the kernel is one of the first programs to load up. It facilitates the interaction between the hardware and software. Kernel communicates with the hardware at a basic level before it starts communicating with the applications. The kernel is a very important part of the computer and has its own separate area of memory. Where the kernel is protected from everything (I.E. software and hardware changes). Once the kernel is loaded, it will start to manage application programs and the system resources. It is best not to alter the Kernel until you fully grasp on their capabilities or you can accidentally cause instability with the system. Potentially making it crash.

Within the initial setup, the kernel will start up something called the BIOS (basic input/output system). This is where the kernel loads up the different device drivers first, before loading the operating systems. The device drivers would include a processor, motherboard, and other hardware before the computer starts to upload applications. If you wanted to start learning about device driver programming, I would recommend learning through Linux and their tutorials. Again, you don’t want to cause any instability with your computer system. Linux will allow virtual simulation using their “Kernel modules” to test your programming for your device drivers. Linux uses C-programming language and I would recommend learning it (Please don’t get confused with Microsoft programming language called C++).

In conclusion, Kernel is integrated into the system to ensure all systems function properly from the beginning. Without the Kernel, the computer has no way of managing the hardware resources to their applications. The kernel is generally well protected from any outside alterations, which they have separate dedicated memory space. Inside the Kernel is device drivers that will upload the system BIOS. This will ensure that the hardware system is running and that the Kernel will then proceed to upload the operating system/applications to ensure smooth running. I would highly recommend that you start learning through C-programming and going through several tutorials to grasp the general concept of device driver programming, so you don’t create any instability or crashes on your computer system. Lastly, Linux is definitely the best place to start with your adventure on programming.